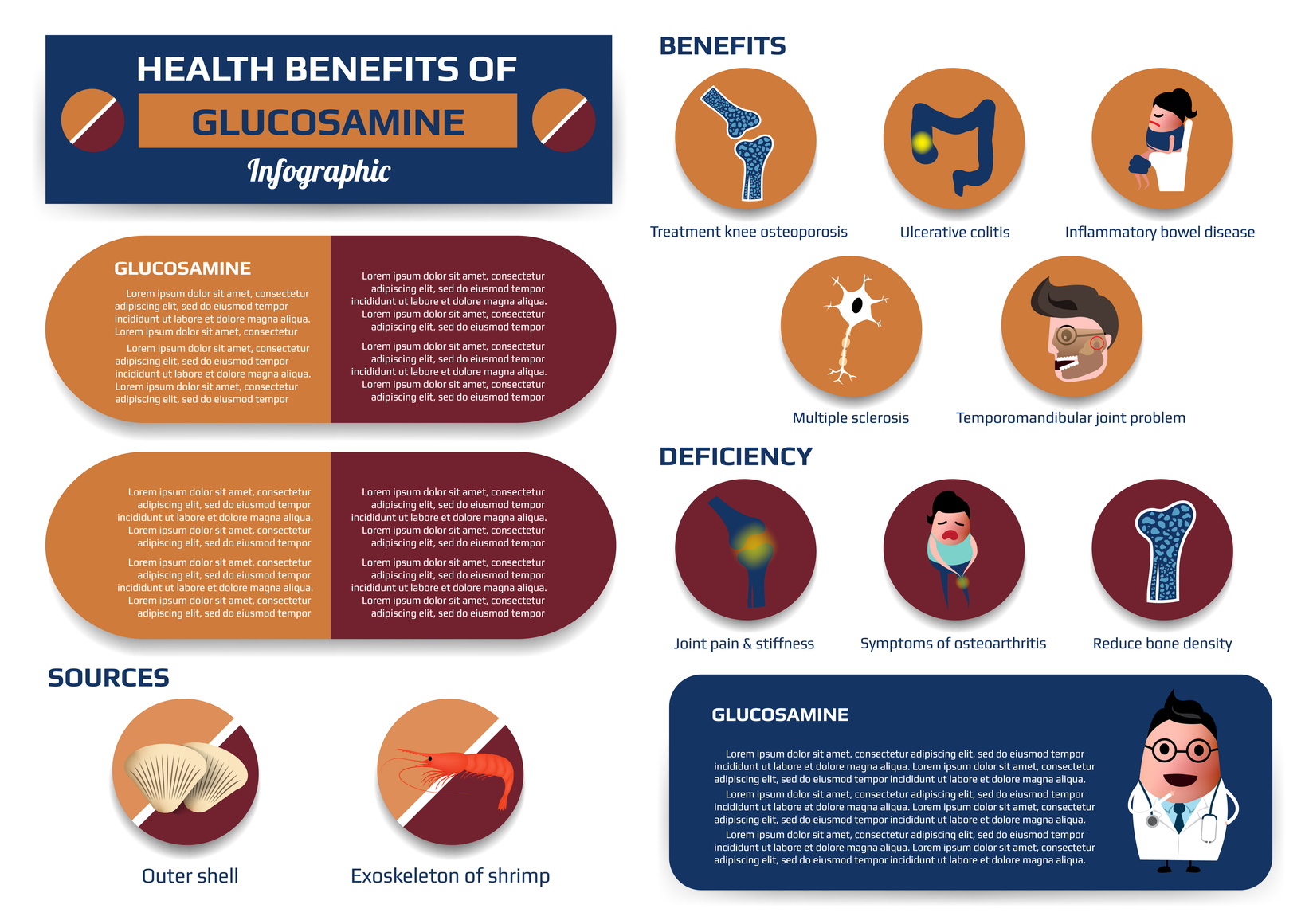 Glucosamine belongs to the class of amino sugars. Chemically it only differs from the common sugar glucose molecule by one amino group, which is not present in glucose.

Glucosamine is a naturally occurring substance (amino sugar) in the joints. Multiple studies have shown that when glucosamine is consumed for a minimum of two to six months, it seems to have anti-inflammatory and cartilage-building effects.

The effects are significantly improved when glucosamine is combined with chondroitin and omega-3 fatty acids. In addition, several other other natural micro nutrient remedies such as pine bark extract and vitamins can help the body fight inflammation and improve the metabolism of cartilage.

The role of glucosamine

Glucosamine is generally considered an essential element of a natural complimentary food therapy for the treatment of osteoarthritis and arthritis. Generally, glucosamine as well as other natural micro nutrient joint foods have no side effects. Therefore they can and should be taken over a long period of time.

TIP 1: Glucosamine sulphate is preferable over glucosamine hydrochloride, because it provides the joint with more sulphur (sulphate).

Are there any side effects?

Currently, glucosamine is one of the most promising natural substances in the support of healthy joints. It is also naturally made in the body, which is why very few, if any, side effects are expected as a result of taking glucosamine. In the human body, glucosamine plays an important role in the development of supporting and connective tissue, which includes the joint cartilage. Glucosamine also supports the production of mucous substances and secretions.

Glucosamine is thought to relieve pain and inflammation and help in the formation of new cartilage tissue. This has been confirmed by many orthopaedists in practice.

Joint cartilage heals very slowly. While skin is regenerated in around seven days, even small amounts of damaged cartilage requires two to three months to recover.

As a result, clinical studies tend to last a minimum of six to eighteen months. Several studies have shown positive effects on patients with osteoarthritis or arthritis. And in addition to this, there have been some very promising approaches in which glucosamine has been combined with other substances such as omega-3 fatty acids and chondroitin.

Although pain relief has often been observed in association with glucosamine, no studies have been able to conclusively prove the regeneration of joint cartilage through glucosamine.

This is likely due to two reasons:

We present here a number of clinical studies on glucosamine sulphate and its effects on pain and mobility in osteoarthritis.

Glucosamine has been the subject of a large amount of clinical studies:

Is glucosamine better taken alone or in combination with anti-inflammatory drugs?

Interestingly, mobility of the affected joints improved in both groups and in general the subjects reported that they felt less pain. As expected, the effect on the level of pain (reduction) felt was greater in the group given the combination therapy. Here the painkillers used specifically targeted and reduced the severe inflammation. This reduced the major swellings, which increased the mobility of the joints. If less inflammation occurs in a joint, the pain is naturally reduced.

How much does glucosamine inhibit inflammation?

If glucosamine is used at an early stage and over a long period of time, it can potentially reduce the need to take anti-inflammatory medication (NSAIDs). Importantly, this means that the side effects of pain killers are reduced. Ultimately, this improves the quality of life of those affected.

Interestingly, glucosamine itself seems to have a weak anti-inflammatory effect. As a consequence, it reduces inflammation and swelling. This could possibly contribute to joint damage progressing at a much slower rate.

Glucosamine can reduce the need for painkillers

In their study, scientists in South Korea have reported the possibility of using glucosamine hydrochloride to reduce the prescription of painkillers for patients dependent upon their individual circumstances 2.

Glucosamine and chondroitin are effective treatments in cases of severe osteoarthritis

A French study was conducted in 2006 involving more than 1,500 patients with osteoarthritis of the knee. This study investigated the impact of various osteoarthritis treatments on the different patient complaints3:

In cases of mild osteoarthritis, the difference between glucosamine and placebo treatment was only small. However, patients with more severe osteoarthritis had statistically significant improvements compared to the placebo (the results were clearly measurable and did not occur by chance). 70% of patients that were given the combination preparation of glucosamine and chondroitin had less pain and better mobility.

Glucosamine in combination with other substances

Glucosamine sulphate affects the pain in the joints and also down the progression of arthritis. Very frequently, however, results differ between experiments in cell cultures and studies in people.

The direct comparison between the quality individual papers is further complicated by the use of different glucosamine dosages and different measurement systems.

Very generally it can be said that glucosamine offers pain relief particularly in cases of mild pain 4.

Combination with Omega-3 and vitamins is recommended

The nutrient combination is therefore consistently more effective than the individual substance 6.

There are also some clinical studies, which could not show any evidence of the effectiveness of glucosamine. A review paper by Burdett and McNeil in 2012 takes a critical view of the previous studies investigating the effects of glucosamine sulphate in patients with osteoarthritis 7.

The authors specifically point out that there are clearly promising in-vitro (laboratory) experiments, but the effectiveness in humans (in-vivo) is very different.

Very often, a modified study design means that the work cannot be directly compared with other investigations. Perhaps most importantly, the actual mechanism of how glucosamine works in the cartilage continues to remain unknown.

The two scientists concluded that glucosamine sulphate may at best cause a mild improvement in pain. However, they do not offer an alternative form of medication instead. The bottom line remains: a product that is consistently able to stop and reverse arthritis has not been found, and on the basis of risk-benefit analyses, glucosamine sulphate remains a recommended basic therapy.

Glucosamine can reduce the side effects of pain killers

In addition to this, it has been demonstrated that a glucosamine protects against stomach damage, which occurs when the painkiller indomethacin is prescribed. Similarly, the use of multi-nutrient combination therapy has shown a considerable reduction in the symptoms of arthritis in mice.

The authors finally highlight that the combination of painkillers and glucosamine could offer a way of saving on painkillers for patients with arthritis in the future. This provides a way of reducing the possible side effects of the medication in the gastrointestinal tract.

Therefore many orthopaedists recommend taking glucosamine and other nutrients:

[quote]TIP: Combine glucosamine with chondroitin and omega-3 fatty acids from fish oil (DHA and EPA). Omega-3 fish oil does not only help to protect your joints against inflammation, but it helps you improve the health of your blood vessels and cholesterol levels at the same time![/quote]

Osteoarthritis in animals: dogs and horses

An interesting question asked was whether glucosamine, when taken orally, arrives in the cartilage of joints at all? To determine this a few studies were conducted with animals, which had been given glucosamine sulphate or glucosamine hydrochloride.

Subsequently the blood and synovial fluid of the animals was tested in order to determine the concentration of glucosamine. In this way, Meulyzer and colleagues investigated the levels of the nutrient in horses, which were given 20mg glucosamine per kilogram of body weight orally or intravenously (equivalent to a human dose of 1500 mg in a person weighing 75kg)8.

After 5 to 720 minutes blood samples were taken from the animals at regular intervals. A sample of synovial fluid was taken 48 hours before the experiment, in addition to being taken 1, 6 and 12 hours after glucosamine was consumed.

Additionally, glucosamine sulphate had a significantly higher level of bioavailability than glucosamine hydrochloride. However the authors could not comment upon the effect of glucosamine on the joint cartilage. In other studies which involve the use of human test subjects, more questions could be answered.

We selected three products for you here, which offer daily glucosamine quantities above 1,000 mg per day – the amount, which has been clinically shown beneficial for joints.

Advice for patients with osteoarthritis

Keep moving every day and eat the right foods to support your joint health!

Firstly, natural remedies tend to be complimentary to a holistic approach of treating arthritis. Secondly, it is important to gently and continuously keep your joints moving, whilst taking care to avoid high impact loads on joints.

The third and final important element of avoiding wear and tear of joints is to avoid being overweight and ensure that you eat properly. This includes avoiding foods, which promote inflammation and instead focus on foods, which combat inflammation.