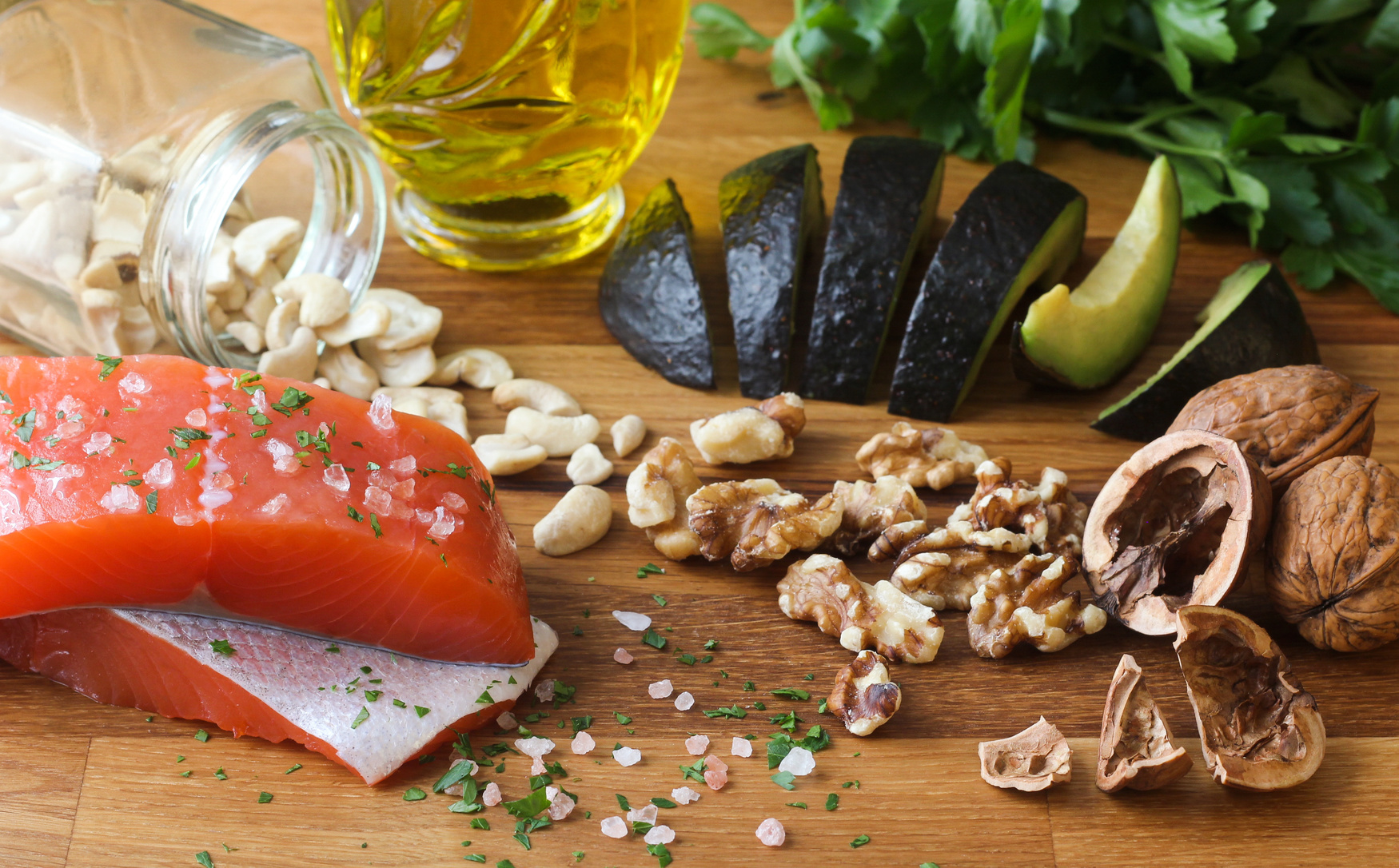 Today, Omega-3 aka omega 3 fatty acids or simply omega-3s, have become an iconic symbol of a healthy diet.

Their anti-inflammatory properties are said to boost overall health and provide relief to osteoarthritis and arthritis patients alike.

Omega-3 fatty acids from fish oil (EHA and DPA) protect blood vessels and inhibit inflammation in the joints. Various studies have demonstrated its effects on osteoarthritis and arthritis (rheumatoid arthritis). One study has successfully shown that Omega-3 fish oil for osteoarthritis increases the effects of chondroitin and glucosamine by about 33 percent.

Side effects are not to be expected, and taking should preferably begin in the early stage of joint problems and be continued on a permanent basis. Especially when taken in combination with glucosamine sulfate, Omega-3 fatty acids DHA and EPA are effective at complementing a natural disease-modifying antirheumatic drug (DMARD) therapy.

There are numerous studies continuously exploring the effects of Omega-3 fatty acids, and by now, there’s a multitude of recommendations concerning the positive impact cooking oils and fish with high levels of omega-3 have on a healthy diet.

But what exactly are these Omega-3 fatty acids? What’s under the surface and how do they work? Why are they recommended for healthy joints as well?

The particular Omega-3 fatty acids exhibiting the best anti-inflammatory effects are DHA and EPA: docosahexaenoic acid and eicosapentaenoic acid. These fatty acids are not found in vegetable foods, but only in seafood, especially in fatty saltwater fish.

Omega-3 fatty acids from vegetable oils (rather than fish) probably lack the health benefit effect, or have a very limited effect. The research concerning the inflammatory process in joints is not focused on the properties of these fatty acids.

A healthy and balanced diet should thus contain fish once or twice a week. This applies to every person, not just osteoarthritis patients. Mackerel, Atlantic salmon and tuna are considered foods with an extremely high content of these health-promoting fatty acids.

Generally speaking, the colder the water in which the fish reside, the higher their content of Omega-3 fatty acids, including DHA and EPA.

In addition to their anti-inflammatory effects, which help most people with joint problems, EPA and DHA are also recognized for

In its final stage, osteoarthritis causes severe pains and develops lasting inflammations. As a result, the joint fluid’s composition also worsens. If there’s a lack of joint fluid, or it becomes increasingly contaminated, the abrasion of articular surfaces also increases, causing additional inflammation and resulting in a more and more vicious circle.

However, affected persons can somewhat influence the course of the disease via their diet, prior to reaching this final stage of osteoarthritis. For the most part, eating too much animal food is what promotes the inflammatory process.  Animal fats contain very high concentrations of a fatty acid from the group of the Omega-6 fatty acids. This fatty acid, known as arachidonic acid, maintains inflammations and further promotes them.

The human body contains certain enzymes for transforming the arachidonic acid to prostaglandins. Prostaglandins are a group of inflammation-promoting substances which directly influence the affected joint. What’s interesting is that the Omega-3 fatty acids are nature’s opponents of arachidonic acid. They are detected by the same enzymes, but can’t be transformed by them. This blockade of enzymes leads to a significant reduction of newly formed prostaglandins resulting in the regression of inflammations. The discussed effectiveness of Omega-3 fatty acids with regards to inflammation inhibition has already been well demonstrated in several pain studies and pilot experiments.

The continuously progressive cartilage degeneration is accompanied by severe inflammatory reactions and almost unbearable pain. While the affected joint initially manifests a morning stiffness, this restriction of mobility exacerbates during the course of the disease, eventually resulting in joint stiffness. Medical science offers a mostly symptomatic treatment primarily aimed at pain management.

The protection of the remaining cartilage and bone material inside the joint is of equal importance. Oftentimes, the administered painkillers belong to the group of non-steroidal anti-inflammatory drugs. In many cases, continuous use may well lead to severe side-effects for the heart, stomach and kidneys.

Consequently, the search for alternatives with few side-effects has become more prevalent over the last few years. Omega-3 fatty acids may be such an alternative, sufficient amounts of which are usually found in saltwater fish. These Omega-3 fatty acids ought to have a positive effect on the development of rheumatic joint diseases. Most notably, they lead to less pain by diminishing inflammatory processes7.

Nutrition contains a mixture of substances, optimally ones that have an impact on osteoarthritis. In other cases, combinations of Omega-3 fatty acids and additional preparations for the purpose of increasing the success in the treatment of osteoarthritis in the future are thinkable. For that matter, studies show that the combination of Omega-3 and glucosamine sulfate is a promising method.

One current paper contains very interesting results which may also be application-relevant in the future. The team around Grünwald combined a daily dose of 1,500 mg glucosamine sulfate with Omega-3 fatty acids8. Over the course of 26 weeks, the participants used an osteoarthritis index to diagnose their pain intensity.

Toward the end of the study, the patients receiving the combined treatment of glucosamine and Omega-3 (DHA and EPA) indicated considerably less severe pain. In contrast to the glucosamine sulfate group, the morning stiffness and restriction of mobility had also diminished in this group.

Just as is the case with osteoarthritis, very painful inflammations occur in the late stages of arthritis. A conventional pain therapy pain therapy also consists of the long-term use of non-steroidal anti-inflammatory drugs, with all their side-effects.

Since the inflammatory processes of osteoarthritis and arthritis are similar, Omega-3 fatty acids is also being discussed as alternative inflammation inhibitors for the treatment of arthritis.

Is there currently any proof that Omega-3 fatty acids can help alleviate pain caused by arthritis?

Initial promising effects of the Omega-3 fatty acids against arthritis had already been found in an experiment with mice. Ierna and colleagues gave arthritic mice krill oil. Consequently, the rate of inflammation in the mice diminished. The animals exhibited less distinctive damages in the arthritic joints9

In 2010, scientists conducted a very small trial with just 23 participants and discovered another very interesting result. The participants who received 0.2 g fish oil per kilogram body weight experienced a verifiable improvement in regards to the swelling of their arthritic joints10. Because this study was conducted with such a small number of samples, no reliable statements can be made in regards to whether or not Omega 3 fatty acids are significantly effective against swelling.
Omega 3 effect on osteoarthritis: Studies on EPA and DHALee and colleagues finally studied the effect of Omega-3 fatty acids on the symptoms of Arthritis in a meta analysis that was published in 201211.

The evaluation involved 183 arthritis patients and 187 subjects from placebo groups. The Omega-3 fatty acids were able to drastically reduce the need for painkillers. Furthermore, the discomforts that accompanied the morning stiffness and swellings appeared to improve. However, these results could not be secured by statistics.

How does Omega-3 help animals?

Research studies on Omega-3 on animals

The effectiveness of Omega-3 fatty acids was also demonstrated in an osteoarthritis model with guinea pigis.7 The study’s focus was the impact of a diet low in Omega-3 on the probability of contracting osteoarthritis.

The animals were split into two groups during the experiment. The first group received normal food. The second group received a different food, which had a high content of Omega-3 fatty acids. For the purpose of assessing the impact the diet had on the osteoarthritis development, the scientists compared the cartilage and bone layers of the joints, as well as several protein markers characteristic of cartilage degeneration.

The resolvines also act as inflammation inhibitors first and foremost. The future will tell, whether the resolvines’ full potential in the treatment of arthritis can be proven in future studies.

It has been proven that the Omega-3 fatty acids DHA and EPA are of special nutritional value. The body cannot produce a sufficient amount by converting other fatty acids. Atlantic salmon, anchovies, herring and mackerel are particularly rich in fat and contain between 1% and 1.8% Omega-3, mainly DHA and EPA.

Linseed oil contains about 60% alpha linolenic acid, while hemp seed oil and walnut oil contain about 15%. Rapeseed oil contains about 9% alpha linolenic acid. Milk and coffee and tea all contain relatively high levels of MSM. Other sources include tomatoes, Swiss chard, alfalfa sprouts corn and even beer. MSM is also found in fruits such as apples and raspberries, vegetables, whole grains and legumes such as peas and peanuts.

What are the sources of omega 3?

Anyone with joint problems should check their diet. Meat and sausage should be removed from the meal plan and replaced as much as possible with saltwater fish high in Omega-3 (sardines and mackerel).

Therefore, any suitable joint nutrition programme should include Omega-3 fatty acids as well.

Omega-3 fatty acids may be purchased from Amazon in various forms, such as capsules or oils. You may find a selection of these products here:

A product could not be loaded.