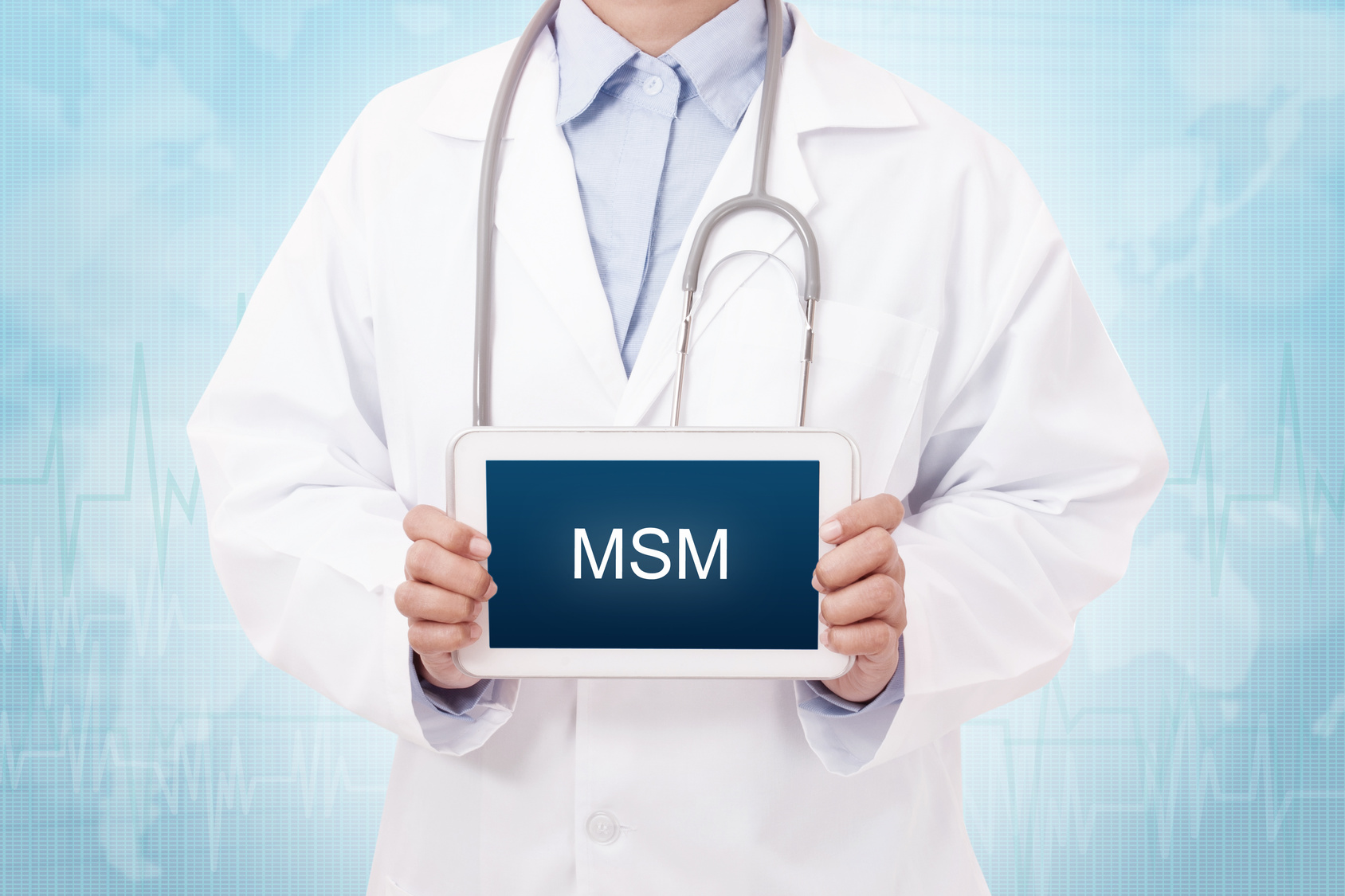 MSM has a pain-relieving and detoxicating effect. The sulfur contained in MSM is an important building block for cartilage tissue. Cartilage tissue should therefore be positively affected by an increased consumption of MSM, although such effects are yet to be conclusively proven.

A minimum daily dosage of 100mg is recommended. No side effects have yet been officially reported. MSM is typically consumed in powder format via capsules for easier, tasteless swallowing.

The health benefits of MSM

MSM is often consumed in the form of dietary supplements for the treatment of osteoarthritis. As a sulfor compound, it provides the body with the sulfur that it necessarily needs to grow cartilage tissue.

MSM is closely related to DMSO, an approved prescription medicine.

MSM is a so-called “metabolite“, i.e. an intermediate product metabolized by the body. It is closely related to DMSO, an authorized medicinal product. The source compound of MSM is DMSO (dimethylsulfoxide).

Intensive research has been conducted on DMSO as a pharmaceutical. Since the stomach immediately transforms DMSO into MSM, one may act on the assumption that identical results can be achieved with MSM. However, the number of studies conducted on MSM isn’t nearly as large as the number of those conducted on DMSO. This is most likely due to the manufacturer sponsoring it’s own studies to sell more of its product.

DMSO is often found in lotions and ointments. Since DMSO can easily be absorbed by human skin, it’s active ingredients reach the blood stream much more rapidly. It also has anti-inflammatory and pain-relieving effects.

In contrast, MSM is absorbed via the digestive system and has to pass through the liver before it is released into the bloodstream.This means the absorbed amount of MSM is significantly reduced.

However, DMSO has the disadvantage that, when taken orally, it may lead to unpleasant breath (scent of fish and garlic). People who use DMSO in the form of ointments frequently report skin irritations. Although DMSO has been classified as a pharmaceutical, MSM is actually classified as a dietary supplement, meaning it can be purchased over the counter.

Studies on arthritis treatment with MSM

THE PAIN-RELIEVING EFFECT HAS BEEN PROVEN

Dietary supplements containing methylsulfonylmethane have been used in the United States for quite some time. Nonetheless, there have been no clinical studies researching the effects of this sulfone prior to 2006.

In 2006, scientists conducted the first small-scale study with the intention of revealing whether or not MSM is effective in osteoarthritis patients.1 Fifty men and women between the ages of 40 and 76 took part in the study. Neither the doctors, nor their patients knew whether they were receiving the actual remedy or a simple placebo. For a duration of twelve weeks, the osteoarthritis patients took three grams of MSM or three grams of the placebo, respectively.

After three months, the MSM group reported that their pains were less intense, while their joint function was increased. Consequently, the quality of patients’ every day lives was significantly increased.

Another study evaluated all published research regarding the role of MSM in the treatment of osteoarthritis2. This type of systematic assessment of other research results is referred to as a “meta study”.

Generally, meta studies are viewed as extraordinarily significant. All in all, 168 patient results regarding the effect of MSM on osteoarthritis were taken into consideration.

This study was also able to verify the alleviation of pain, yet the data supporting this could not be backed by statistics. The individual studies often involved variations in methodology, particularly with regards to the best possible dosage or the duration of treatment.

A new paper from 2011 now confirms the pilot study by Kim and colleagues conducted in 2006: MSM can improve mobility and alleviate pain in osteoarthritis patients.

Using an identical experiment set-up, 49 men and women between the ages of 45 and 90 took part in the 2011 study. The doctors and patients didn’t know whether they were receiving MSM or a simple placebo. This time the dosage was lower than that used in the preceding study.

Participants received 1,125 mg MSM twice a day, or the Placebo. Patients were questioned with regards to their algesia and subjective mobility of the affected joints. Surveys took place on the first day, after six additional weeks, as well as after twelve weeks (at the end of the study).

An improvement of mobility, as well as a lower burden of pain were reported by those patients treated with MSM. The observed effects were relatively exiguous. Thus, according to the scientists, it remains unclear whether methylsulfonylmethane does indeed display a relevant clinical effect on osteoarthritis.

THE REASON ANIMAL EXPERIMENTS ARE NECESSARY

The medical field recognizes various types of studies. “In vitro” are studies based on cell cultures. These studies have the advantage that other effects can be shielded. However, a cell culture inside a Petri dish exhibits a different behavior than that of cells within a complete and complex organism. Therefore, studies performed on humans (“in vivo studies”) are most significant.

Yet, if the goal is proving long-term effects, researchers are reluctant to wait over one to five years. Consequently, they like to resort to a trick: they examine the effects via very large dosages, as well as in extreme situations. In order to avoid putting humans at such a risk, animals which are genetically close to humans are used for those types of studies.

MSM IN ARTHRITIS IN MICE

One animal experiment study conducted in 2013 may now deliver this proof. A Japanese team of researchers studied the influence of MSM on the degradation of cartilage in arthritic mice. In doing so, they determined that an appropriate intake of MSM may indeed reduce cartilage damage. Nonetheless, caution will be needed in the future, because large dosages of MSM may cause serious atrophies of the organs, as demonstrated by the mouse model. 3.

MSM is also used for:

However, far less research has been conducted on these uses, compared to the use for treatment of osteoarthritis and arthritis.

In the EU, MSM is classified as a dietary supplement. It is very safe to use and no side effects worth mentioning were observed. Overdosing is difficult to cause, even willfully and with maximum effort.

Based on the studies, the recommended dosage is between 0.5 grams and 4 grams per day. Higher dosages should only be used under medical supervision for general safety reasons.

MSM is also not appropriate for use during pregnancy. However, that’s a general recommendation as scientific knowledge is insufficient.

The dosage information relates to the oral intake (capsules, pills). In rare cases, MSM is also injected under the skin or – like DMSO – added to ointments. Especially in such cases, please consult your physician.

The dosage at which test animals suffered MSM poisoning amounted to around 20 grams per kilogram body weight. Therefore, a human (75 kg) would have to take about 1.5 kilograms MSM each day. Studies with volunteers involved administration of 1 gram per kg body weight (i.e. about 60 to 90 grams per day) over one month. No negative epiphenomena were detected5

Milk and coffee and tea all contain relatively high levels of MSM. Other sources include tomatoes, Swiss chard, alfalfa sprouts corn and even beer. MSM is also found in fruits such as apples and raspberries, vegetables, whole grains and legumes such as peas and peanuts.

Provide your joints with all nutrients they need. Read the overview of the best joint supplements here.

You can purchase MSM or methylsulfonylmethane from your pharmacy as a dietary supplement. Numerous high quality remedies with good customer reviews can also be found on amazon and independent vendors, some of which we have selected here: